Get fresh music recommendations delivered to your inbox every Friday.
We've updated our Terms of Use. You can review the changes here.

by Philippe Petit: a musical travel-agent 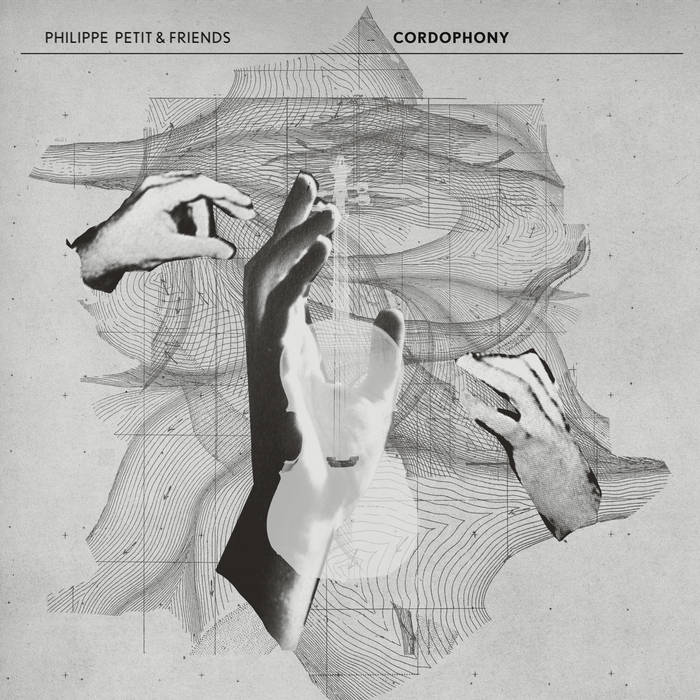 A filmic adventure where luscious string arrangements convey a whole world of emotion, and the organic sound of instruments is never outshadowed by machines.

"Cordophone" is a French word which refers to musical instruments whose sound comes from the vibrations of one or several strings.
CORDOPHONY shows Philippe Petit playing with string parts by many talented friends in order to create an imaginary world of dense mixtures of electro-folk acoustic instrumentation, post-classical orchestral arrangements filled with collected field-recordings, vanguard soundscapes, manipulations of glass and vinyls.
Petit's taste for risk-taking and for flights of sonic poetry has seen him working on musical motifs that can evoke at times a stormy, cinematic, or contemporary atmosphere. He has always favoured the human touch and thus no less than 20 instrumentists are participating to his most ambitious project: "Cordophony"

Pursuing a tradition he had started with his "Reciprocess" project, given away with The Wire magazine issue 301, Petit is benefiting from the talent of 18 of his friends-musicians, creating a mini-ensemble without whom nothing could be possible and emphasising that according to him music is a collaborative affair.
Even if he creates some original music Petit would rather be introduced as a "musical travel agent" than a composer :
"I try to tell a story, with a beginning and an end, invite you to share my world for a while. I edit and cut "sound-images", to process textures and their resonances into vertiginous travellings of tones ; conjuring up flashes of black & white grainy timbres, behind-the-sound close-ups, addictive stop-motion harmonic effects."

Nils Frahm works as a composer and producer in Berlin. In early 2008 he founded Durton Studio, where he has worked with likeminded musicians, such as Peter Broderick. He has released two critically-acclaimed albums on Erased Tapes and Kning Disk.
www.durtonstudio.com/projects/detail/project/63

Adrian Klumpes plays grand piano and has released on Leaf recordings (1 solo disc two albums as pianist/keyboard player in Triosk (Moment Returns and, this summer, The Headlight Serenade), as well as a collaboration with Jan Jelinek, 1+3+1)
www.adrianklumpes.com

Since 1990, between extensive touring with PJ Harvey, Rob Ellis has been involved with a wide range of other projects.
Rob is also very interested in contemporary “classical” music (for want of a better term), having released recordings in that vein 'Music For The Home' Volumes 1 and 2, on the Leaf label.
www.robellis.net

Manuel Zurria is a member of Italian ensemble Alter Ego, who performed on Touch's publication of 'The Sinking Of The Titanic' alongside composer Gavin Bryars and turntablist Philip Jeck. Throughout his 20+ years long carreer Manuel has collaborated with legendary composers such as luc ferrari, alvin lucier, arvo part, john cage, morton feldman, lászló sáry, & many more...
www.alteregogroup.it

Alison Chesley is a Chicago based cellist who has been active in the rock world for the past 14 years. In addition to recording and touring with the band Verbow, she has worked with musicians such as Mono, Bob Mould, the Sea and Cake... She currently fronts her own band, Helen Money, and has just signed her second album to Table Of The Elements.
www.myspace.com/helenmoney

Aidan Baker is a canadian musician + writer currently based in toronto. he performs as a solo artist + with the groups nadja + arc. a classically trained multi-instrumentalist, his primary instrument is the electric guitar w/ which he creates music ranging from experimental/drone to ambient post-rock to contemporary classical. he has released numerous albums on labels from around the world + has authored several books of prose/poetry.
www.aidanbaker.org

James Johnston is the singer, multi-instrumentalist, and founding member of influential UK band Gallon Drunk. He plays with Krautrock legends Faust, was a member of Nick Cave and the Bad Seeds from 1994 to 2008, and has recorded and toured with a variety of other musicians including Lydia Lunch, Barry Adamson, Dot Allison… He also composes for film, and has acted in independent movies including Clean (2004) by Olivier Assayas.
Bela Emerson is an innovative and prolific performer of electric cello, electronics, tenor viol and musical saw, who creates passionate, evocative and spontaneous music of no definable genre. As well as collaborating widely with other musicians and artists, she has four solo releases (vinyl/CD); the latest one, "Hespera" appeared on BiP_HOp to great acclaim.
www.belaemerson.com

Richard Harrison lives in Manchester and throughout his 30 year long carreer has played with Nico + GodCo + Stockhausen & Walkman + Red Krayola... as well as permanently with groups such as Spaceheads , Homelife and Toolshed.
www.spaceheads.co.uk

Alexander Bruck comes from Mexico where he is a member of the National Mexican Orchestra, he also regularly improvises with local experimentalists, though his main act is La Orquesta Silenciosa who tour festivals and releases on Mandorla.
www.myspace.com/alexanderbrucksantos

Even if she is only 22, Maria Grigoryeva has already won several International competition for young musicians. She has composed symphonies, quartets, solo-pieces for different instruments, different ensembles, and a lot of music for percussion and harp. On "Many-minds many-worlds" she joined forces with Alexander Mahnev and Vladimir Shubin whose names are well-established in St Petersburg classical/contemporary spheres. Nowadays she is art-director, violinist and composer of her own ensemble for Contemporary music in St-Petersburg, and works with many Petersburg musicians, DJs, dancers, video-artists. www.myspace.com/grigoryeva

Hervé Vincenti enjoys developing graceful notes and varied melodies. Aside co-founding (w/ Philippe Petit) Strings Of Consciousness, Hervé was also a member of Foern-Set and had played with Luc Ferrari.

Belgian vibraphonist Els Vandeweyer began her musical career on the classical path, focusing on contemporary pieces and her works have been documented on various recordings.
www.myspace.com/elsvandeweyer

Perceval Bellone plays saxophone, clarinet and Tibetan bowls. He has studied electro-acoustic music, been active in improv scenes and managed to find a style both very personal and physical. He is an active member of Strings Of Consciousness.
www.myspace.com/percevalbellone

Raphaelle Rinaudo plays the harp, combing and messing up her strings cautiously knitting melodies that she later distorts by pulling the chords. The atmosphere thus carefully woven, cannot but convene the repressed temptation of the sirens’ song… Raphaelle also plays in the Pierre-Yves Macé ensemble whose albums have been released via Tzadik & Sub Rosa + is an active member of Strings Of Consciousness

It's been more than 25 years since Ulrike Haage had started the first European women's Jazz Orchester REICHLICH WEIBLICH and since then her piano has graced countless recordings.
www.myspace.com/ulrikehaage

Drummer, percussionist and composer Ahmad Compaoré was revealed in 1991 by Fred Frith’s rock opera "Helter Skelter". Since he has collaborated with such musicians as Fred Frith, Marc Ribot, Jamaaladeen Tacuma, Otomo Yoshihide, Rhys Chatham, Barre Phillips and countless musicians from varied styles... The "Ahmad Compaoré Quintet" offers an unique repertoire mixing jazz, soul, world, rock and electronic music, continuing Ahmad's journey on the road of rhythms, those of a musician without borders...
www.myspace.com/ahmadcompaore

Interested in soundtracks even if I create original music I'd rather be introduced as a "musical travel agent" than a composer.

Bandcamp Daily  your guide to the world of Bandcamp

Sampa The Great joins the show to discuss her release, "As Above, So Below".